This was an unusual find with Harvest Hosts. Bill located a free boondocking home for the night for us at an airplane museum called Hanger 25 Air Museum, in Big Spring Texas.

We were looking forward to exploring  Hanger 25 Air  Museum. The lady who booked the spot with Bill, told him they had a B52 that you could actually go up and sit in.

We were 3 hours away. Unfortunately it always takes us longer because we have to stop for gas. Luckily we made it with an hour to spare and time to explore the museum.

A brief history taken directly from their brochure.

“Hangar 25 Air Museum exists within a WWII era hanger. The building was built in 1942, with the opening of the Big Spring Bombardier School. The Bombardier school closed in 1945 with the Allied victory of WWII.

The base reopened in 1951 as Big Spring Air Force base. It was renamed in 1952 after Lt. James L. Webb. Webb was a Big Spring native and a WWII fighter Pilot. He died in a tragic accident over the coast of Japan in 1940. Webb Air Force base closed in 1977 after the end of the Vietnam War.

Hangar 25 Air Museum aspires to preserve the memories and legacies of these two bases and those that served here. In addition we strive to serve our community, honor our veterans, and educate our children.”

Hangar 25 Air Museum has been preserving the history of Big Spring Army Air Forces Bombardier School and Webb Air Force Base Since 1999.

On our tour of Hangar 25

We were greeted by a very sweet woman, who took us inside the hangar and gave us a brief history of the hangar  building and a few of the air craft that were stored in the hangar. She then told us we were allowed to wander on our own, and to feel free to go up into the B52 cockpit.

There was a small family group that came in right behind us. When they went to the right, Joy made a beeline for the B52. We were a little disappointed that only a small part of the fuselage was there to be explored. Fortunately,  this was the best part. Climbing up into the VERY narrow opening, Joy went first up into where part of the crew sat, then up further still and over to where the Captain and co-pilot  would sit.

At this point, Joy’s claustrophobia was kicking in, but Joy was determined to see what she could of this B52. Joy is a great lover of planes of all kinds. Moving to the cockpit, Joy stood between the two seats for only a moment until she was brave enough to figure out how to sit down into the Captains seat.

Once seated in the Captain’s chair

Once seated, Joy was in awe of all the instrument panels that surrounded her and the co-pilot. Everywhere Joy looked there were dials, switches and levers.   Sitting in the cockpit of this B52 was very impressive to Joy. Even though Joy could not see out the front windshield. lol.

Bill came up to take many pictures, before Joy let him know it was time for her to leave and leave quickly. Popping out of the Captain’s seat, Joy left the cockpit and down the two levels a lot quicker than when she came in.

This was an experience, Joy will never forget.

Exploring the rest of the museum 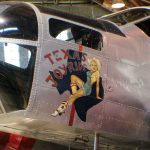 Once outside again, we took our time walking around all the other planes that were on display and reading the write ups beside each one. Looking back at this history was really quite interesting and gave you a real appreciation of the skills these men had in flying these planes during the war.

The planes were  privately owned. The planes were on loan by the owners to the museum. Theses particular planes  were flown in to be put on display, so have not been dismantled at all. The woman who greeted us, explained that, each plane would only need a tune up to be flown out again.

The woman also mentioned, that the planes might become available for the museum to purchase and the museum would become the permanent owner. If our memory serves us correctly, Big Springs would be purchasing the planes so they would remain at the museum.

Once, we had finished exploring inside the museum, we chatted with the kind lady a bit more about the museum and then we went outside to check out the 3 planes they had on display.

Something you shouldn’t miss

We have to say, that if you are ever in Big Springs, Texas, this is a stop that you should make the time to visit. This is a free museum, that accepts donations and the staff is so friendly and helpful.