East Cove was another first experience for us.

East Cove was another first experience for us. Our plan was to sail from Winter Harbour to East Cove, Kaprino Harbour and spend the night at anchor.

Kaprino Harbour is located in Quatsino Sound. Quatsino Sound is the northern most of the six sounds on Vancouver Island. The other five sounds are (North to South):

Sailing with sails was not on the cards for today.

The winds did not cooperate, for us, as we had planned on raising the sails and sailing. Due to the lack of wind,  we ended up motoring both there and back.

The sail was approximately 2 NM (nautical miles) each way, and took about 2.5 hours each way, our average speed was around 4 knots. 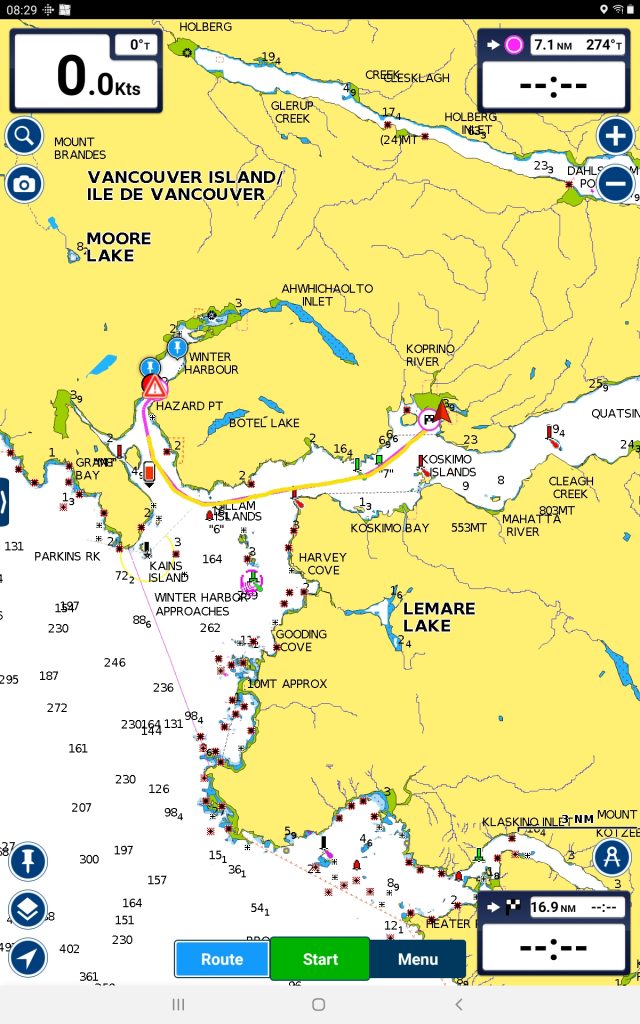 This was our first time entering a cove. We used 2 different Cruising Guides and our boating application, Navionics.

The Cruising Guides we use are:

We felt we were well  prepared and ready to go. Until, we (actually Bill) arrived and could not spot the entrance to East Cove.

Making the  approach to the cove exactly as it was described in the Cruising Guides, Bill could not spot the entrance. The indicated path, appeared to be headed directly into land!

We took a time out, switched the engine to neutral and studied the books and Navionics again. Finally it became apparent that there was indeed an entrance just past some rocks on the port side. What an optical illusion!

We had the Cove to ourselves! The Cruising Guide stated the East Cove was a “special spot” and oh boy, they weren’t kidding!

We couldn’t get over the beauty and tranquility. The cove was tree lined with easy dingy access to shore.  We spent a peaceful night without any issues or worries. Waking  up in the morning feeling relaxed, we had a nice breakfast and realized that we didn’t have anything to do – other than whatever we wanted to!

Taking in the sights and marveling at the thousands of bell shaped moon jellyfish was a fascinating way to spend our time.

A few facts about Moon Jellyfish:

What a way to spend a beautiful day!

Another pleasant surprise was, if we held our phones just right, we actually had  cell service from time to time, we took the opportunity to send a message to our son in Winter Harbour that we were going to stay another night.

The rest of the day was spent relaxing and exploring. Joy read her books, Bill and Bailey explored an island, with a pebble beach and took some pictures.

As we were preparing dinner (Spare Ribs), we heard some activity on the VHF radio. The coast guard were rescuing people. It sounded like a boat had run aground onto rocks. There were 4 or 5 people injured. Listening intently, until we finally realizing it was a Coast Guard TRAINING EXERCISE!

They started each transmission with something like “Coast Guard exercise” which finally clued us into the situation. Bill and Joy  were very relieved to hear it was just an exercise! We continued listening to the exercise until they wrapped it up finding the whole experience very entertaining and educational!

Weighing anchor around 9:30 the following morning we then headed back to Winter Harbour.

The trip to East Cove was an incredible experience, one which we hope to repeat many more times!