Skip to content
HomeSailingPost 157: Sailing from Port Hardy to Winter Harbour – the conclusion.

Post 157: Sailing from Port Hardy to Winter Harbour – the conclusion

The final legs of our sailing trip from Brown’s Bay Marina to Winter Harbour, BC.

Our last post (Post: 156) described our trip from Brown’s Bay, Marina, BC to Port Hardy, BC. This is the story of the rest of the trip from sailing from Port Hardy, BC  to Winter Harbour, BC through the Nahwitti Bar.

As mentioned in our last post, we arrived in Port Hardy quite late. Despite all the planning Bill did, he overlooked one (OK, SEVERAL) key items.

The plan was to moor at the public dock for the night, we approached the public dock but it looked different than the Captain expected. We used our spotlight but no luck. Fortunately, the Captain knew of another marina in Port Hardy, The Quarter deck Resort and Marina and we found our way there (turns out the public dock was closed due to Covid-19 :).

After docking we had a very late dinner and then grabbed some much needed sleep.

The next morning (July 2nd, 2020) we had an early breakfast and prepared for the rest of our trip; topped up our fuel, purchased a full propane tank, filled the fresh water tank, took out the trash, and paid for the mooring.

The Elephant in the room…

After breakfast and taking care of the preparations, we discussed what to do about the dingy. James had discussed the situation with someone at the Quarter deck Marina and they suggested we call the coast guard. We made the call and explained we lost the dingy around Alert Bay. The Coast Guard said they would investigate and get back to us.

Looking at the weather window, we made the decision to move on and deal with the loss of the dingy at a later date.

Mid morning we set sail for Bull Harbour, BC.

Bull Harbour is only about 22 NM from Port Hardy, or under motor about 5.5 hours. We were about 2 hours out of Port Hardy BC, when the VHF radio squawked at us “Poppy II we have your dingy”. Astonished, Bill quickly grabbed the mike and responded. The Coast Guard then confirmed the dingy was ours with our identification.

After a brief discussion, we agreed that we would turn around and head back to Alert Bay to recover the dingy. Once the Canadian Coast Guard understood we were a sailboat, they said they would launch one of the Zodiacs’. The plan was to us meet when our paths crossed! This was awesome! Probably saved us up 10 hours of sailing! 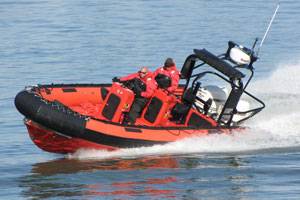 Bill was not sure how fast the Zodiacs’ were. But, the Coast Guard met us about 1 hour after the radio conversation. Quickly transferring the dingy over to us then they were on their way again. Bill believes they used this excursion as a training exercise or just to have some fun :).

The morale on the sailboat (Poppy II) instantly improved! We turned around and headed for Bull Harbour, BC!

Bill and James were pretty happy. The dingy had been recovered and  we were back on our way to Bull Harbour BC. The sun was shining, the waters pretty tame and the wind almost non existent.

Passing Duncan Island and in the Golet Channel

The day was progressing well. We had passed Duncan Island and were navigating Golet Channel. Bill witnessed his first sighting of a tugboat pulling a barge and could not believe how much distance was between the tug and the barge.

Shortly after passing the Tug Boat, the winds picked up. This is where the 2nd and 3rd surprise surfaced. In hindsight we should have been much more prepared, rather than taking someone’s word, Bill should have taken the sailboat out for some test cruises before committing to such a challenging sail from Brown’s Bay to Winter Harbour.

As mentioned the winds had picked up and we had raised the main sail. there was a particularly strong gust of wind and the traveler had pulled free! The main sail was flapping violently in the wind. James did a remarkable job of getting things under control. We regrouped and motored on.

After we were under control, there was still a favorable wind, we decided to deploy the head sail. Once the head sail was deployed, we shut the outboard off and started to enjoy the quiet of sailing under wind. Unfortunately this is where we met out last challenge for the cruise.

The halyard on the headsail came undone and the headsail fell into the water! Again, James quickly recovered the head sail and we were back to motoring. This is where James made a now famous statement:

Without any further incidents, we arrived in Bull Harbour. Bull Harbour is a beautiful spot. Because of Covid-19, we were restricted to the dock.  We managed to reattach the traveler, but unfortunately the halyard for the head sail had pulled through the pully at the top so we would be without a head sail for the rest of the trip to Winter Harbour. 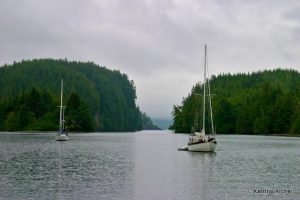 We enjoyed a nice quiet night in Bull Harbour, had a good sleep and woke up refreshed. The next leg of our trip was from Bull Harbour to San Josef Bay, BC.

This leg of the trip had the potential of being very dangerous. We had to time the crossing of the Nahwitti Bar carefully due to the tides, as well as watch the winds for both Nahwitti Bar and Cape Scott.

Here is a link to a great article explaining the challenges of Cape Scott and the Nahwitti Bar.

We checked the weather forecast and the weather did not look too promising. We decided we would spend the day in Bull Harbour and see what tomorrow looked like. As the morning progressed, it seemed weird, the sky was as blue as could be, not a cloud in sight, and there was NO wind at all. Once again we checked the weather and it now looked pretty good for rounding Cape Scott!

We decided to go for it and prepared to set sail to San Josef.

In case the weather turned for the worse, we stored any loose items away and made the sailboat as ready as possible. We checked, double checked everything, and set sail (so to speak). Minutes away from the dock we noticed something! Our Dingy was still tied to the dock and we were leaving it behind again!!! We quickly turned around and retrieved our dingy.

This is where we named the dingy – it’s official name is now “Wilson” (remember the 2000 Tom Hanks Movie “Cast Away“? Despite our best efforts to lose Wilson, it always came back!

The trip through Nahwitti Bar was interesting. We crossed at a fairly good time (near slack tide) but it was obvious you have to have respect for Nahwitti Bar. You could feel the current trying to force the sailboat in one direction then the other. There was a pretty good swell, but as it turned out we were past the bar before too long.

The next was going to be Cape Scott. After we were clear of the Nahwitti Bar we had several hours before rounding Cape Scott. We tried to use the main sail, but there was just not enough wind to make it worthwhile. We passed a few sport fishing boats but all in all it was pretty quiet cruising.

Before we knew it, we were rounding Cape Scott. The waves crashing against the shoreline was very very impressive. Bill instantly understood why you didn’t want to round Cape Scott in bad weather. Even though it was a picture perfect day the waves and swells were huge!

After passing Cape Scott we discussed potentially trying to make it to Winter Harbour, however we decided to stick with our original plan of anchoring in San Josef Bay for the night.

We arrived in San Josef Bay late afternoon. James found a good anchorage and we enjoyed the scenery for a while and then prepared dinner.

San Josef Bay is a beautiful large sandy beach – it rivals any beach in the world. Sea Stacks, white sand, rain forest in the background – stunning!

This was another first for Bill. Never had he spent the night at anchor. There were many thoughts of what if our anchor didn’t hold and we drifted to shore, or drifted out into the ocean? By the time we turned in for the night, we had been at anchor for several hours and had not dragged at all.

The cruise from San Josef Bay to Winter Harbour went off without a hitch. We saw a few whales and miles of stunning coast line. After a while we could see Kains Island Light House and we knew the trip was almost over.

As we neared Kains Island there were several sport fishing boats in the area, we could hear some of our friends on the radio.

Our family and friends were happy we had made it from Brown’s Bay to Winter Harbour without any major incidents!

It was nice to be home!