Skip to content
HomeSailingPost 155: Time to try something new!

We have been on the rugged, but beautiful West Coast of Canada for over a year now.

Almost everyday we see boats of all types and sizes go in and out of the harbour. Small ‘tinies’ to large commercial fishing trawlers – monohulled sailboats to 50′ catamarans, kayaks, canoes and paddleboards!

Commercial fish trawlers: are massive and carry a crew of 3 to 30 and some even process the fish they catch right on board. They are also known as “Draggers” because they drag nets behind them to fish.

Monohulled sailboats: sailboats with only 1 hull (which is what we have)

Catamarans: sailboats with two hulls, can be as small as 30 ft and up from there.

There is an old saying “When in Rome do as the Roman’s do”! After much discussion, we decided to purchase a sailboat and try our hand at sailing! 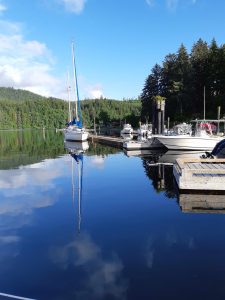 Bill spent hours, days and weeks,  researching sailboats and trying to find the perfect one. Finding one was difficult, with COVID19 in play.  It seemed that everyone was giving up vacations abroad and buying up RVs and boats in record numbers. To us it seemed, that as soon as an ad was posted, it was sold!

Bill found one in Victoria that looked promising. We contacted the seller and it seemed to be a sailboat we should look at. Bill made an appointment for 2:00 PM the next day in Victoria. Victoria is about 7.5 hours from Winter Harbour. Beautiful trip in summer but very long.

The next morning Bill got up, had breakfast and was just about ready to head out, but he had an uneasy feeling. He went online and checked the ad one more time and to his amazement, the price had been increased by $2,500! Bill grabbed the printout of the ad he printed yesterday and sure enough, the price had increased overnight.

Bill tried calling the seller, but the seller would not answer or return our calls. Needless to say, Bill didn’t go look at that boat.

Finally, after weeks of looking, Bill found  another possible candidate, a 28′ Sunstar. He  was excited and wanted to view it ASAP before someone else grabbed her. Bill made the appointment with the owner/seller – “Ray”. Ray seemed very nice, he was selling because he had become quite ill and was tying up loose ends. Such a sad story.

Ray met Bill in Brown’s Bay Marina at the agreed upon time. Ray showed Bill over the boat. To Bill’s surprise, the boat was clean, solid and came with many extras.

After chatting for a while, Bill phoned Joy and they discussed the boat. Although it was clean, the inside was dated and needed to be freshened up. Together they decided to make the investment.

Bill and Ray made the deal (early June) and Bill gave him a deposit. The balance would be paid when the boat was picked up.

Back to Winter Harbour…

Bill got back to Winter Harbour, a little worried about showing Joy the pictures, but being a trooper, Joy looked at the pictures and thought the sailboat looked just fine!

And then she popped the now famous question: “How do you plan on getting the boat to Winter Harbour, since you have never sailed before?”

The new adventure had a slight wrinkle…

To sail from Brown’s Bay where the boat was  (near Campbell River, BC) to Winter Harbour you have to navigate through several potentially tough areas of the North Pacific Ocean – Cape Scott and the Nahwitti Bar to name a few.

To make life even more interesting

An added thought since this was originally written, Bill introduced Joy to catamarans recently (Jan 2021). Now she has the bug to finish updating our sailboat and look around for a catamaran. lol Joy thinks they are very very cool, more space and loves the idea of 2 hulls which would make the boat even more stable. Deck room galore!

“That’s next years model” as one Realtor once told us while looking for a new house lol. Something to aspire to if we fall in love with sailing.