Whoa – Wait – winter! Are we ready for this?

We have lots of plans for us to successfully get through the Canadian winter months, but at this point, they are mostly that – plans LOL.

The good news is we had a great time with the dogs playing in the snow. At first they ‘carefully’ walked down the snow covered steps – almost like they didn’t want to slip!

After dinner, Bill tried to take the dogs for a walk, Lucky (the 3 year old ‘pup’) was all for it, the old ‘mature’ one, Sierra, wanted nothing to do with going outside in the snow. Once outside Lucky ran around like a puppy, sliding all over the place and getting full of snow. It took Bill a while to convince Lucky to come back inside. Bill tried throwing snowballs for Lucky to catch, but the concept was foreign to Lucky. She just watched the snowball land in the snow and break apart (even though she will catch balls and sticks).

Looks like tomorrow we will be in the market for a snow shovel and a ice scraper for the car windows!

The sights that were presented to us in the morning, after the storm were amazing! Thick, wet show hung on all the trees and branches – it was like a scene out of a hollywood movie. 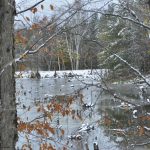 We took a drive and found some lakes, the views were spectacular. Ice was just beginning to form on the water near the shore. The contrast between the white sparkling snow and the still vibrant fall leaves was magical.

We checked the weather forecast, which showed that with the next  few days the temperature will be back up to 8 – 10 Degrees C (46 – 50 F) – allowing us some time to finish getting ready for the arctic temperatures that are surely coming.

We hope you enjoy the following photos.