On the road to Zion National Park, Utah, was a real pleasure. Again, we are taken by the scenery and vastness of the country side. Wide open spaces then mountains upon mountains. We love that we still see Joshua Trees here and there. As we get closer to Zion, we decide to listen to the radio station posted on the road side signs. We begin to hear about road restrictions for vehicles. OH OH..this can’t be good.

We apparently were too TALL and LONG to go through the Tunnel in the park with the normal traffic. We would need to pay a ‘traffic control fee’ to get through the tunnel ($15.00). Basically they stop the oncoming traffic so you have the entire road to yourself. Turns out all the campgrounds were full anyway. We already knew most of the park did not allow personal vehicles, you were to use the FREE buses to get around the park or walk. Zion National Park is 146,597 acres (229.058 sq mi). The FREE buses sounded pretty good.

There were only two campgrounds on this side of the park and of course they were both full 🙁 . When we arrived at the Entrance, the ranger looked at the length of our trailer and said, “Sorry folks you are too long to go through the Tunnel without purchasing an oversize vehicle pass.” Bill agreed and told him we had hoped to camp on this side but saw that both the campsites were already full. He asked the Ranger if he had any suggestions for us. The friendly fellow then suggested a few places. One of them being only 1 mile back down the road.

We then drove up to the Visitors Center, mainly to be able to turn around lol and for Bill to go in for some information on the Park. Once he came out, we drove back down to the campground the Ranger suggested.

Again, we planned on staying only one night. The cost of our site at Zion Canyon Campground and RV Resort was $51.00 with the taxes per night.

When Bill returned to the trailer, he called Joy outside and said look at this and walked Joy around the trailer, showing her the mountains right beside us and the small river running a few hundred feet from where we were camping. Joy knew he wanted to stay two nights, so she said ok, go back and book a 2nd night lol. Besides, we had 4G internet. We could get more work done lol.

Much to our delight, the FREE bus stop was just at the entrance to the campground and there were stores and restaurants near by. We also had access to showers (which the resort gave us 6 coins for a 6 min shower each coin) should we choose to shower there. 🙂 There was even a laundry we could use. We had water, electricity and sewer for the $51.00. haha, we don’t have these luxuries very often :).

We noticed a lot of young people in tents behind us and thought hmm it might get noisy, but turned out they were extremely quiet and very polite. lol Some young girls came over to us and asked if we minded if they used our electricity in the morning to cook some pancakes on a griddle. Bill said no, feel free, you can even use the table that was there. (haha it wasn’t our table). They then used the electricity for dinner too, but that was fine, they talked to us when ever we saw them and asked our names and told us theirs. There was 13 of them in two vans, travelling. All seem to be really nice.

We were introduced to Zion National Park, by watching a Youtube Video of Drivin’ and Vibin’, a couple we have been following for a few years. Both Joy and Bill being afraid of heights decided not to try the Angels Landing hike.

The next day after walking the girls down to the river, Bill and Joy got ready for a hike. We walked up to catch the bus which came very quickly. The bus took us to the Visitor’s Center a mile away. There we caught another bus that took us to Zion Lodge, a few miles into the Park. At Zion Lodge we disembarked to find our hiking trail of The Lower Emerald Pool Trail. This was a paved trail which Joy has never done before. The one side was a sever drop off with trees and rocks which became difficult after a while for Joy due to her fear of heights.

The path was wide but when hiking people tend to follow the rules of the road. Going up you are on the right, coming down you are on the left. So going up, Joy had the drop off on her right side which she tried to ignore as best she could. Occasionally Bill would stop to take pictures so Joy would take that time to put her back to the cliff and take a deep breath lol. 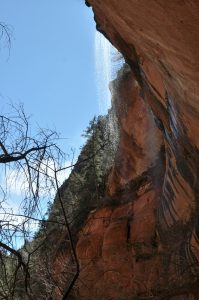 Once at the Lower Emerald Pool, we both had the time to relax and enjoy the view. While Joy stayed away from the SPLASH ZONE lol, Bill went under the Falls and went a little further on for pictures. This hike was 1.2 mile hike with a 70 ft incline but was an up and down trail. If you chose to go higher to the Emerald Pools Trail Head it would have been 3 miles and a 350 ft elevation. With  the way this trail was made neither Joy or Bill were interested in attempting that. lol

Back at ground level again

Back at ground level again, we recrossed the bridge  and wandered over to an open grass area in front of the lodge. Many people were sitting and having a rest or their lunch so we decided this would be a good place to eat as well. Out came our packed lunch and on the grass we sat. It was quite pleasant sitting in the sun and people watch as we ate.

After our meal, we took a quick look in the gift shop. We find the prices in all the National Parks to be quite reasonable, which is actually surprising. From there we walked over to the bus stop and headed further into the park. The really neat thing about riding the bus is that you get to hear  various things about the history of the park and the land as you ride.

The buses are two attached to each other so they can move quite a few people at one time and the buses come quite frequently. You never have to wait more than 5 or 10 minutes. 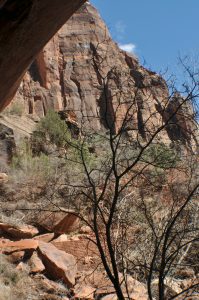 Our next stop was at Temple of Sinawava. At this stop there was a trail called the Riverside Walk. It was becoming late in the afternoon at this point but we wanted to see at least part of this trail. We began the walk and saw quite a few people coming back in waterproof rubber pants and boots. Joy looked at Bill and he explained that further down the walk you can wade into the water and it becomes quite deep. Right then in March it would also be quite cold. You would have to take the path for a mile before you came to the water, then you can wade into the water and go for a little bit in between the narrowing cliffs or quite a ways. It would be totally up to you.

We chose to go only a little ways on this path so Bill could get a few pictures. He found it too busy to get the kind of pictures he wanted so we turned around and headed home.

On the way back, we had a SUPER bus driver named Jan. At this point they don’t play the pre-recorded history of the park. Jan told us all kinds of interesting facts and pointed out many things that we may of missed without her guidance. She was awesome. Too bad we were in the back of the second bus. Jan even stopped the bus on the road for us to watch some Rock Climbers going 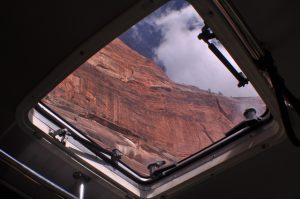 up the cliffs beside the road. Bill was able to catch a shots through a glass skylight in the bus.

Once back at the terminal, we disembarked once more and found our way back to the bus that would return us to the camp ground. I never did mention that, they have banned cars from driving in most of the park and are now using buses to preserve the environment. They found that the pollution from the cars and the wear and tear of the vehicles were destroying the area too much.

This area was very beautiful and had much to offer. We hope that their efforts pay off.