New Orleans, LA had to be one of our favorite places to be. We stopped there on our way out to Quartzsite, AZ in Oct, 2017 and decided that we needed to stop again on the way home. Both times we chose to stay at the Bayou Segnette State Park.

We love to go to New Orleans, to walk down Bourbon St., to watch all the people at night. During this particular time, the Wrestle Mania was on which we were not aware of when we arrived. Bourbon St. was absolutely thronged with people. Everyone was having fun and chanting and laughing.

There was an abundance of  Police presence that we didn’t understand, but just thought OK, this must be something new. It wasn’t until later when we took a cab back to the campsite that we found out about the Wrestle Mania.

Our first night in New Orleans

Our first night in New Orleans we decided to take a cab in so that we could have a nice dinner and a few glasses of wine without worrying about driving home. That was an expensive adventure with the cab fare of $42.00 one way. But, when you considered the fact that parking in New Orleans is $40.00 for 3 hours, and/or meeting up with a police officer who was not happy you had a glass or two of wine, we decided it was fair enough.

We had the cab driver drop us off at the Mona Lisa Restaurant on Royal St., in the French Quarter. The gentleman at the door offered us a choice of two tables and we were seated immediately. Normally a table by the kitchen wouldn’t be our first choice, but some how, in this little place it worked. lol

With in a few minutes Joy noticed people standing on the sidewalk close to the windows. She thought it was odd, but let it slip her mind. Later, those same people came in and were shown a table. Then Joy noticed it happening again. It then dawned on Joy, we had just made it into the Mona Lisa before a rush. People were lined up outside to get into this tiny restaurant now.

The staff at Mona Lisa were super friendly, and quick to respond to any request.  Considering the number of people they had in the establishment at dinner time.

The food was absolutely delicious and the portions were huge. We each had a meal which came with a salad, and cheesy bread. Bill and Joy each had a couple glasses of wine (Bill red, Joy white). Then, even though Joy was stuffed, she saw a HUGE piece of cheese cake go by. Bill looked at her and laughed. He knew Joy’s weakness.

As our waitress passed he asked for a dessert menu. The menu quickly appeared and Joy was caught between a few things, but the cheese cake won out. When the cake was placed in front of Joy, she almost fainted with the first bite. Joy convinced Bill to have a taste. This had to be the FRESHEST tasting cheese cake Joy had ever eaten. Despite all the hard work Joy has put in over the past few months to lose some weight, tonight’s dinner was a huge lapse. She managed to eat 95% of this incredible cake moaning at each bite with Bill laughing at her the whole time lol.

Now we gave you great detail of our dinner at this amazing restaurant for a few reasons. One to let you know how perfect it was so that you may enjoy this restaurant yourself should you ever be in New Orleans and the other to say, that for all that we ate and enjoyed, the bill only came to $60.00. Now how unbelievable is that? A delectable meal that filled you up, drinks and dessert and it only cost $60.00? Soo worth the cab ride in and home again.

The Algiers Ferry was a great way to get over to New Orleans. We looked up the directions on the internet. We have taken the ferry before, but we forgot how to get to the parking lot. To park is $10.00 in a field within walking distance to the ferry. Or you can take your chances parking on the road. Our preference is to park in the parking lot with our truck backed up against a pole to prevent the back door being opened.

A 5 min walk has you standing at the gate for the ferry. The Ferries run at the top and half hour from Algiers over to New Orleans and at fifteen minutes and forty-five minutes past the hour from New Orleans back to Algiers.  You can catch it from New Orleans at  the foot of Canal Street, next to the Audubon Aquarium of the Americas.

The cost of the ferry is $2.00 per person each way. EXACT change is needed. They will not give you change back.

Walking from the Ferry 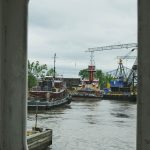 Walking from the Ferry we decided to go shopping for our family. We headed over to N Peters St and visited certain stores along the way. When we hit St Phillips St. we crossed over and walked back to Jackson Square. Walking up beside Jackson Square, we were able to stop and listen to a marvelous jazz band playing in front of St Louis Cathedral. lol Oddly enough right beside a “QUITE CHURCH ZONE” sign. They had quite a crowd around them. Some people were even dancing to the music.

After a bit, we moved along heading back to Decatur St. As we did, we past by the most unique store, we had ever come across in our life. So of course we had to go in. We did have to make a purchase for one of our kids there so we won’t mention what we bought. lol.

At this point it had begun to rain slightly so we decided it was a good time to head back to the ferry and home. 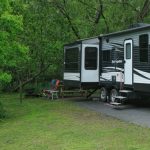 We will be leaving New Orleans April 11th. Before that, we hope to go back into the French Quarter for Bill to take some pictures. Joy would like to see if she can find the homes that Marie Laveau, a Voodoo Queen had lived in, in New Orleans.

We also need to plan our next stop over on the way home. 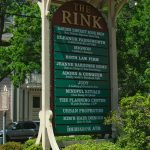 The last day of our time in New Orleans, we decided was to be spent looking at the fabulous architect in the Garden District. They offered walking tours of this district because of the history and beauty of the home, businesses and gardens.

We did the research to find out what streets bordered this area and where a walking tour began so we knew where to start :). Once we found our way down there, it came as a surprise at how narrow the roads were. Many of the roads were one way, but some were two way streets. Oddly enough, with cars parked on either side of the road, there was barely enough room for ONE car to pass. We had no idea how two cars were supposed to pass lol. Assuming the on coming car would have to wait their turn to go through.

The homes in the Garden District

The homes were magnificent. Sitting back from the road a bit. Many had small gardens in front  of them, or ornate fences around them for privacy. The ginger bread along the balconies and roof tops was absolutely intriguing. Almost all the homes had shutters  which added such elegance to the look of the homes in general.

Old flowing trees lined the roads with grace and plenty of shade. There were small sidewalks or banquettes  as they used to be called.

“In the city’s early days, city blocks were called islands, and they were islands with little banks around them. Logically, the French called the footpaths on the banks, banquettes; and sidewalks are still so called in
New Orleans,” wrote John Chase.

If you are interested in history at all, the above link is a brief history of New Orleans and it is really quite interesting to read.

Can you tell we love New Orleans? This was Joy’s 4th visit to this old city and Bill’s 5th. We never know if this will be our last visit but we always hope it wont be.

Not much was said about the state park that we always stay in. This park was a decent place to stay. The sites were spaced well apart. We were on 56 last time but had to move to 55 because we chose to stay longer and our site was reserved for the following days we wanted to stay.

The cost was $30.00 a night for water and electricity on a paved pad with grass and if you were lucky trees beside you. There was also a bbq grill, fire pit and a picnic table. One of the complaints we had was the Air boats near by. These gave rides all day long and were super noisy. We felt like we were parked beside a race track. Was not very relaxing from that perspective.

Another complaint was the staff in the Visitor’s Center. When we arrived, there was a young girl  there and Bill found her to be very rude and less than helpful. Unfortunately he had to deal with her a few times. The last time he went into the office to let them know we reserved another site, there was an older woman there who was much more friendly and helpful.

Our final observation was, the 2 laundromats on site, which are offer FREE washing and drying. This was very nice, but the machines  never worked both times we were there. We would rather pay and have working machines than no machines at all. When we went to do our laundry, 1 machine was working for washing. When we went back to put the wash in a dryer, out of 2 locations there was only 1 dryer and that had a line up for it. We had to leave the campground and find a laundromat to dry our clothes.

As for internet, we have T-Mobile, that would go from 4G to 0 and back again within seconds. The campground offered internet but it was not reliable. Too many people trying to use it at once.

So, if the  unpleasant person in the Visitor’s Center was removed, we could fix the other problems our self :). The bottom line is, the location is reasonable to stay at if you wished to visit New Orleans, we were only 30  mins out of the French Quarter.