Waking up to sunshine instead of clouds was a great way to start the day. With our plans today, we knew we would not be doing any hiking. At least we BOTH wouldn’t be doing any hiking, so the plan was to take the dogs with us. Grabbing a quick breakfast, we loaded up the girls, got plenty of water, packed a lunch and we were on our way.

Our first stop was going to be the Ghost Town of Rhyolite. But since the internet had been out in the Park all of yesterday, which meant the ATM machines were down two, we decided to go the extra 4 miles into Beatty, Nevada. lol Again this was a great decision!

We saw a sign showing free range donkey could be ahead. Rarely do we see what the signs tell us lol. BUT, this time, we didn’t get 100 feet up the road and we see another car off to the side. Slowing down, we see 3 donkeys. Bill pulls over to park so he can hop out to take some pictures. It’s then we realize that there is one on our side of the road as well. Looking back to the north side of the road we now see 7 other donkeys all casually standing on the road haha.

They allowed the silly tourist (us) take as many pictures as we wanted and never moved. After a while, we slowly drove off into the town of Beatty. Beatty turned out to be a cute little town, with quaint looking stores, but best of all the gas was only $2.43 so we filled up and found a working ATM machine. Gas is very expensive in Calif, so this was like a gold mine lol.

Heading back to our original plan of visiting the Ghost Town we past by where the donkeys were and they were all gone. 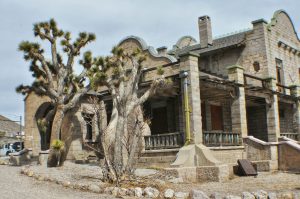 This was a very cool place. Starting at the far end, we saw the railway station for the Las Vegas & Tonopah Railroad. This was the best preserved building of the town. As we wandered back down the road we came across the remains of the bank and a large 2 story school house.

There is a Special 3 room house owned by Tom Kelly which was made of all bottles from the various saloons in town. This was quite interesting to see. The walls were a full bottle deep with cement in between each bottle.

Moving down the road, we saw the “Last Supper” by Albert Szukalski. in the Goldwell Open Air Museum. This was the piece that launched this museum. There were a few more pieces of art by this same Artist. In this museum was “Icara” a by Dre Peeters a tall wooden women with her arms out stretched. Quite interesting. Also was a mosaic couch that was huge. An interesting item was 4 cloth people sitting and/or standing. They asked that you sit with this group and take a selfie and send your pic to an email address. This was one of many settings all over the world that was going to be put together for a showing at some point in the future, and your picture would be in the display with these figures. Joy was too shy to do this.

The town of Rhyolite was known for hanging a man twice. Once because they hanged him for some crime, the second time because the news paper reporters just showed up late and missed it, So they hung the same man again.

This was quite the town in its time and it lasted for about 10 years…was a rough town by the sounds of it lol. Was very cool to see though.

The Mesquite Flat Sand Dunes were pretty cool, we drove past them for a bit before we came to the parking lot. Then we drove in and parked. Looking over the acres of Dunes was neat, but having lived near sand for years, lol we didn’t get too excited.

This was where we decided to stop for a tailgate lunch. Bill pulled out our little BBQ and proceeded to make us a delicious hot thin steak sandwiches for lunch. We sat and gazed over the sand fields watching people enjoying walking in the sand. This was the perfect spot to take a break and chill out. Dogs needed a walk and a drink too :).

From the sand dunes, we traveled to Mosaic Canyon. Here Bill was going to attempt the hike while Joy stayed back with the dogs and read. There is a 2.5 mile gravel (and deeply rutted) access road to the trail head. If you take it easy, any car/truck/RV will make it up the road. 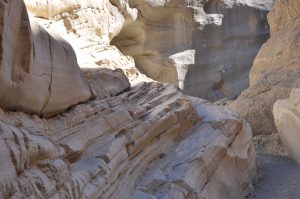 Bill packed up his camera gear, loaded up with water and was off! The hike was wonderful! Bill only made it 3/4 up the trail to where there was a 20′ dryfall that blocked the trail, although there are ways around the dryfall, Bill determined it was beyond his capabilities and headed back to the truck. With stopping for many photos, it took almost 2 hours.

The rocks, scenery and polished marble walls were amazing!

This was our last stop for the day. We decided to take a look one at a time so we could leave the windows open for the girls. This was only a .5 mile walk on wooden walk ways to view these little pupfish habitat in a salt marsh. Joy was not sure what she was expecting, but she was a little disappointed at this trail.

We are sure it would appeal to most people, just wasn’t up to  all that we had seen up to now. The tiny fish looked like minnows to us lol.

In all, Death Valley National Park is very impressive and needs at least several weeks to appreciate it to the fullest. As we may have stated earlier, it is not at all what we expected. It was very scenic, lots of 4×4 trails, lots of hiking trails, many scenic trails for ‘regular’ cars/trucks and cycling was allowed almost everywhere – something for almost everyone!