We chose to visit the  Grand Canyon, South Rim and entered  through the Desert View Entrance. On our way up the mountain road into the Grand Canyon, temperatures began to drop drastically. Snow began to fall, and the roads became slushy. Driving became a bit “DICEY  (thank you Tim and Terri lol).” Normally this was not an issue to Canadians with a 4WD truck :). BUT, if you were pulling a 31′ dual axle trailer this becomes a whole different story.

Neither Bill nor Joy were comfortable on the winding roads with drop offs on the way up to the Grand Canyon. Since the road was 2 narrow lanes, we became committed. Bill just took it easy and drove with care.

At the Entrance, we found out the roads had only JUST BEEN REOPENED. Once we were in Grand Canyon Park, we stopped at the Desert View Visitor Center to get some information. 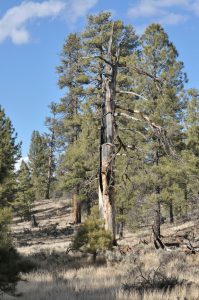 For some reason, this was a very busy time in Grand Canyon so the going was slow. We decided to find a camp ground out side of the Park itself. Bill knew that Kaibab National Forest was just outside the Park which meant, that we were able to camp for free there. So we left the Park, went through the cute town of Tusayan, AZ. A few miles down the highway, we found the Entrance 308 which lead to some free camping in Kaibab National Forest.

A great spot with plenty of room on a dirt and gravel circle with a pre-made fire pit. Obviously a camp site before. We set up and let the dogs have a bit of a run before it became dark. This dirt road lead further into the forest, and more camp sites, but we chose not to do the wash board road this trip.

The next morning we got up, gave the dogs a run, then tucked them in for a few hours. It didn’t seem wise to walk them among the people on the Rim Trail. They are very big dogs and we know that trails can be tight at times.

Back at the entrance, we had to wait for a bit. The day was sunny and warm. Such a difference to the day before. As the line moved up we saw that it opened up to 5 lanes. Once we moved to the 5th lane we quickly got through.

Bill thought we should take a tour of the Park first to get our bearings. Joy agreed. We knew of 1 big parking lot from the day before, but we hoped to find another one close to the Rim Trail.  We managed to get from one side of the Park to the other without too much difficulty. NO luck with finding a parking spot. EVERYONE thought today was a great day to go walking and visiting the Canyon lol.

We did manage to turn around once we past the Train Station. Yes I said Train Station at the Grand Canyon. Cool Hmm? On the way back we kept getting lost. The roads were under construction and the signs really were confusing and somewhat unhelpful.

Through trial and error, we made it to a parking lot and found a spot to park. We parked in parking lot “A” near McKee Amphitheater  and walked the Rim trail to the East all the way past the Yavapal Point and Geology Museum almost to Mather Point. There was construction on the Rim there and both Joy and Bill had pretty much had enough of heights by this point.

The Rim Trail was paved, very wide and winding. The edge some times was very close to the paved sidewalk and at other times it juts out quite far into the canyon. In a couple of places there was a few feet of metal fences that were 4 ft high that Joy could walk up to and actually look down into the canyon.  Occasionally, there was a low stone wall about a foot high and 10 inches thick here and there as a barrier. 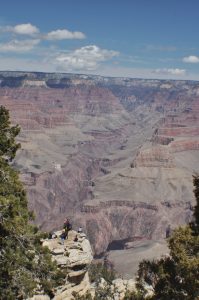 Mostly people are free to walk along the EDGE of the Rim to view the Canyon at their own risk. Many times Joy had to look away as parents of very small children let them wander inches from the edge of the canyon terrified she would see them topple over.

Joy even saw adults standing or sitting on the edge to have their pictures taken.  We both wondered, are we being irrational in our own fears of Acrophobia or are these people totally unaware of the danger they putting themselves and their children in?

What Joy thought of the Grand Canyon South Rim

But aside from all of the above, once we were able to actually look at the Canyon from a safe place, it was awe inspiring. We were just disappointed that the day was hazy and didn’t allow for great pictures to be taken. Now that we have seen both the North Rim and the South Rim, we both think the North Rim is better. The surrounding area is much more relaxed and old world. The canyon that Joy could see lol was more varied and interesting.

We have Post 13 for the North Rim and now one of the South Rim, you can check out the pictures and decide for yourself. 🙂