Mastodon Peak Hiking Trail was a 2.4 mile hiking trail which also took us to Mastodon Peak Mine. Bill, Joy, Tim and Terri were eager to 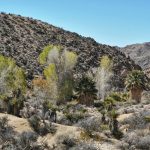 explore this  trail. The warning at the front entrance was a little intimidating when it asked people to report any sightings of Mountain Lions to the Park Rangers. But at least they told us what to do if we did happen to come across one. The small print did not say “run like the dickens the other way screaming!!” lol

Joy is new to hiking and this trail was more than she had attempted before, but she was willing to give it her best shot and see if she could keep up to the other more experienced hikers in this small group :). They are all such terrific folks, they casually stopped to take pictures or drinks of water frequently to let her catch up on the steep climbs haha.

Fortunately there was much to see and take photos of . Once again, this breath taking vista did not let us down. Aside from the challenge of “Naming that plant or cactus” we all had our eyes on the look out for any critters that may be lurking about. 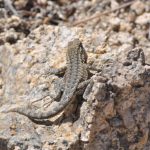 Alas all we saw were a few birds, and what we believed were geckos or lizards. Just tiny little fellows, only a couple of inches long if that. But holy smokes were they fast. Bill just barely captured one in a picture. Unfortunately his “CLICK” of his camera scared him away before Tim could catch him in a shot.

UP and up we climbed passing gorgeous coloured cactus (some beginning to bloom) and Ocotillo in bloom as well. This hike was incredible. Challenging at times for Bill and Joy as they are both afraid of heights and some of the pathway dropped off on one side. But when we reached the Mastodon Peak Mine near the end where WE turned around, the hike was well worth the effort.

The return trip down 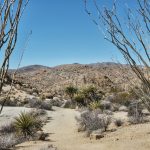 There are really no words to describe the beauty that you may see when in this area of Joshua Tree National Park. The whole park is magnificent and totally worth the time to come visit. Our return down the trail was a little easier except for the steps down that came up to mid thigh on Joy lol. She is a shorty you know haha.

In the end, you finish this trail with the satisfaction of witnessing  great beautify and the feeling of a terrific work out. We all had had a tremendous time and enjoyed the time spent with each other.

After getting back to the RVs and having a bite to eat, we decided to go on one more road trip! We had read somewhere that there was a ‘Painted Canyon’ hike near Mecca California (which was only 10 or so miles from us). Being it was not on National Parks’ land we took the dogs hoping they would get a bit of exercise. 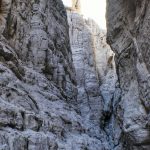 When we got there, you could see the Salton Sea in the distance. The road in to the canyon was your typical washboard dirt road. Painfully bumpy at times (not so much for the humans, but for our vehicles lol. The drive there was amazing, so scenic!

We read over the rules on the bulletin board, and there were no rules about dogs. For some reason, we decided NOT to take the dogs. Joy and Terri said they would stay back with the dogs while Tim and Bill would try the hike, if the hike was worthwhile, Tim and Bill would watch the dogs and Terri and Joy would experience the trail.

Wow, what an adventure! The trail was at the base of the canyon, at times you had to turn sideways to get between the canyon walls. Then you had to scramble up 6 to 10 feet of boulders to reach the other side of the trail. So glad we did not bring the dogs!

Eventually we came to a HUGE wedge shaped boulder (maybe 20′ tall) that was blocking the trail. Bill and Tim looked at each other and decided the mature thing was to turn around, which they did (with age comes wisdom lol). The colour and views were awesome, glad we decided to go!

When the guys got back and showed the pics and described the trail to the ladies, they decided, they didn’t need this particular thrill lol.

This was our last hike together near/in Joshua Tree National Park. We were both leaving tomorrow to head to Death Valley.