A last Minute Change in Plans!

During a pleasant and relaxing three day stay at Corinth Recreation Area campground, our now standard procedure is to research our next destination each morning over tea. After looking at the maps and websites we had decided on a campground just outside Collinsville, Mississippi called Twiltley Branch.

While hooking up the trailer Bill went over to our neighbors to chat. Through conversation, Bill mentioned we were headed to New Orleans. but He also said, we didn’t need to get there for five days. During the five days we were going to meander our way down.

They suggested a route that was very senic and a campground that they loved due to the quietness and proximity to Lake Davis. The route took us down the famous Natchez Trace Parkway. The campground they highly recommended was Davis Lake.

While Bill was chatting with the neighbors, Joy had loaded the dogs, maps and all the other stuff into the truck and had already set the GPS for directions to Twiltley Branch.

It took about one hour of driving to get to the Natchez Trace Parkway. Once we were on the parkway, we understood why they recommended it. The road is fairly narrow and a little rolly from the pavement sinking due to the relatively soft ground. The scenery was beautiful and every few miles there were historic spots and/or scenic lookouts. The speed limit was limited to 50 MPH with  no commercial traffic allowed. It is a very relaxing drive. There are hiking trails scattered throughout the parkway along with campgrounds. The ‘Trace’ as locals refer to it , is 444 miles long and runs through three states and 10,000 years of history.

We arrived at Davis Lake to a beautiful campground. Most sites back on the lake and they are staggered in such a way you have privacy. Each site has a paved pad to park your rig on, a gravel area beside the pad to put a few chairs and then a 30′ x 30′ raised gravel pad where the picnic table, BBQ and firepit are. Then there is a grassy area that meets the water. Very nice! 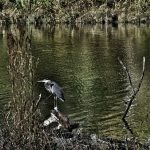 An added bonus, right behind our site, a Blue Heron liked to hang out.

We stayed at Davis Lake for 3 nights. Explored the area a bit and also explored the ‘Trace’ a bit. Found some interesting Indian (Native American’s in Canada speak) ‘Mounds’ that are sacred. There does not seem to be a true understanding of what they were used for. Some folks think they are burial grounds, while others think they were a form of protection.

The camp hosts at Davis Lake were very nice folks, they talked to us every day and told us about the area and campground.