On this day we got up, all excited to begin our first hike in Joshua Tree. We decided to begin with a short hike to Barker Dam Loop. On the way there, we got to pass the unbelievable picture perfect scenery again. It was so difficult not to keep stopping to take picture after picture of this magnificent National Park. 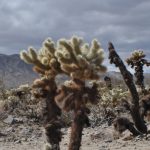 We watched for the Cholla Cactus Garden on the way. Since the sun was shining so brightly and the day was not windy, we decided to stop again and walk through this area at a more liesurely pace. The colours of those Cholla Cactus, (also known as The Teddy Bear Cactus) were so vibrant you couldn’t help but appreciate the splendor of each of them.

They looked so soft and fuzzy, like a halo effect but if you looked closely at them, you would see thousands of sharp needles sticking out of the fingers of each cactus. The temptation to touch was overwhelming. But then the instinct to avoid pain kicks in lol.

Back on the road to Barker Dam 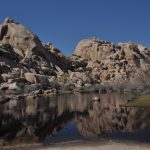 Back on the road again, we agreed not to stop again until we made it to Barker Dam. Barker Dam was a 1.1 mile easy walking trail with minimal elevation gain. The trail wound through boulder outcrops  that became very narrow in parts then opened up in other areas.

There was a lot of vegetation along the way, small birds and tiny lizards. We even saw a couple of healthy looking gray squirrels we didn’t expect to see :).

Once we were half way, we could see the water in the distance so we decided to climb up on a huge warm boulder and have our lunch. It was so pleasant sitting in the sun, watching the people go by and watching the ducks play on the pond in the distance.

After a leisurely lunch, we continued on our way. Wasn’t long before we came to Barker Dam. Bill was happy to be able to get so many pictures. Joy just sat on near by sun warmed rocks and watched. It was surprising how many people of various ages were out  wandering along that trail. This area attracted quite a few people. But, also surprising was how perfectly clean it was. SPOTLESS! This alone was really nice to see. The boulders were so impressive and Joy kept looking at them and seeing shapes in them like a kid does with clouds lol. Bill didn’t always agree haha.

Back in the car again, the only stop we had planned was at Skull Rock. This was not on the map we received at the Visitor Center, but something you see as you travel along the road. Every time we passed by this area, there were at least 20 cars stopped there. Just so happens there was also a trail at that same area.

EAGLE EYE Joy kept her eyes open for it, and when she saw it in the distance we looked for a parking space. Bill had to walk about 300 yards to get up to the rock. There were so many cars and people about, it was astounding. Bill went and captured a few photos, but he was a bit disappointed as every time he went to take a picture, someone new would decide to go crawling in the skull. He could never get one without a person inside of the rock itself.  Ah well to be famous.

Skull Rock was formed a long time ago when rain drops accumulated in the small depressions and then began eroding the granite. In time, more rock eroded and more water was able to accumulate. Which led to more erosion until two hollowed out eye sockets formed. That was how the rock began to appear to look like a skull. Don’t you just love the wonders of Mother Nature?

The rest of the way home, we just kept our eyes open for other things we wanted to see another day. Since we were going to be here for several days, and not everything is on the map, we were making our own notes for future ventures. The rest of the trip was spent in OOOS and AAAHHHs of the view ahead of us, that we had seen the day before, but was still absolutely gorgeous to us. We don’t think we will EVER get tired of looking at this area any time soon.

Watch out for Day 3 at Joshua Tree..