Now, we were  the proud owners of a 28′ sailboat. The next step was to figure out how to get the boat from Browns Bay (near Campbell River, British Columbia, Canada) to Winter Harbour, BC Canada.

We did consider purchasing a boat trailer. This was quickly ruled  out. Sailboat trailers were difficult to find and quite expensive, especially considering it was more than likely only going to be used once.

We considered hiring a company to bring our boat here but we ruled that out pretty quickly as well. Both these options required bringing the boat down 70km of dirt logging roads from Port Hardy to Winter Harbour! The road is infamous for causing damage to any vehicle that uses it!

We asked around and turns out there were plenty of sailors in Winter Harbour!

One of our friends was quite excited about helping us out. He (James) agreed to “Captain” the boat to Winter Harbour. Bill would go along for the experience. Bill had no idea what he was in for :).

We decided that, Chris our youngest son, would drive Bill and James down to Brown’s Bay in our truck then return home to Winter Harbour alone.

This was going to be an eye opener for Bill! Cruising from Browns Bay to Winter Harbour was going to take several days. Discovering, the trip involved crossing through some areas that had to be done at ‘slack’ tide was a surprise to Bill. He wondered why this was necessary.

Well in several areas the channel either narrows or becomes quite shallow (in some areas the channel becomes both narrow and more shallow!) During tide changes  (floods or ebbs), the volume of water that is moving, can create issues. From 15 knot currents, to extremely large waves and/or tidal pools. This was all new to Bill and it was becoming quite an education!

Slack Tide is when the ocean is not ebbing or flooding. To navigate Johnstone Strait we wanted to leave when the tide was ebbing so we did not have to fight the current.  This meant we had to  leave Browns Bay around 2:00 AM in the morning! Well, this was really becoming an “Adventure”, hopefully it does not become a “Grand Adventure“!

As mentioned, this was quite an learning experience for Bill. One of the nuggets of knowledge Bill picked up was that weather could change plans in a second. With that in mind, the plan was to monitor the weather and plan accordingly – basically hour by hour.

How the cruise unfolded… 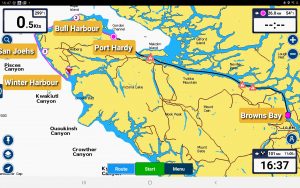 We left Winter Harbour early June 30th and drove to Brown’s Bay Marina. Our first stop was to hit Campbell River to provision for 4 days at sea. Again, this was quite new to Bill, so it was a bit of guess work.  After provisioning, we arrived at the Brown’s Bay Marina around 3:00 PM June 30th, 2020.

Jim, who we purchased the boat from, spent a few hours going over all the different sails, instruments and other useful information. After Jim parted, we started preparing for the early departure the following morning (2:00 AM). We filled up the fuel tank as well as a couple of Jerry cans. Made sure the fresh water was full and prepared our dingy.

After dinner, we settled in for the night, trying to be ready for the early departure!

We left Brown’s Bay Marina around 2:00 AM. The weather was overcast but relatively calm. Excited and a little apprehensive, Bill wondered if he would be seasick, scared or ????

As it turned out, none of his fears or worries were justified. Thanks to James who was an awesome Skipper!

The first surprise was that although it was 2:00 AM and cloudy, it was not all that dark. After our eyes adjusted we could see the breakwater and other objects.

The cruise to Port Hardy was long, about 20 hours. We motored the entire way as there was little wind. Outstanding scenery, snow capped mountains (yes in July), whales, dolphins, marine traffic, and the ocean itself with swells, waves and fresh air!

Our dingy was doing fine being pulled along behind the sailboat. However as we passed Alert Bay (almost to Port Hardy) we noticed the dingy was taking on a bit of water due to the choppy waters. After a discussion we decided that it was only a few more hours to Port Hardy and we would take care of the dingy there.

James was piloting the sailboat and Bill went down below to start preparing for dinner in Port Hardy.  After getting dinner ready, Bill heard a message from the Canadian Coast Guard on the VHF radio “white dingy found submerged near Alert Bay”. Bill jumped up to check on our dingy and sure enough, it was gone!

Both Bill and James tried to raise the Canadian Coast Guard on the radio but they could not hear us. It was late, we had probably been cruising for 16 hours at this point, we decided to continue on to Port Hardy and deal with the missing dingy in the morning.

We arrived in Port Hardy July 1st around 11:00 PM, Tired, frustrated because we lost the dingy. But, overall Bill was pleased, they had navigated through some difficult waters without any major incident (except for the dingy), no seasickness, no issues with the sailboat!